Amber Balcaen brings her need for speed back to Canada

Winnipeg, MB, Canada – On the heels of becoming the first Canadian female to ever win a NASCAR sanctioned race in the USA, 24-year-old Winnipegger Amber Balcaen will be driving the #0 sprint car owned by Glenn Styres for the 360 Sprint Car Canadian Nationals at Oshweken Speedway September 15th and 16th.

Oshweken speedway is located in Oshweken, Ontario, Canada and is a 3/8th of a mile track.

Balcaen’s racing career has been nothing short of phenomenal. A third generation racer, Balcaen, who started racing at the age of ten, has also reached success as the 2014 NOSA Rookie of the year. And now, she is gunning to be in a sprint car more regularly in between her asphalt races.

Balcaen loves racing more than anything, and is most happy when she puts on her racing suit and gets behind the wheel.

“I am super excited to be back on the dirt track and in a sprint car. Thank you to Glenn Styres for giving me this opportunity,” said Balcaen, when she talks about going back to her roots in racing.

“The amount of support Canadians have given me this past year has been amazing, and I feel extremely thankful to not only be back in a sprint car again, but to be racing in my home country.” I can’t think of a better way to come off of a big win then to hop back in a dirt sprint car.”

Balcaen and Glen Styres first met at the Chili Bowl Nationals in 2015. They were the only two Canadians to compete in the Chili bowl out of the 300 plus entries.

For more information about Amber Balcaen and to find out how to sponsor her incredible racing journey, visit amberbalcaenracing.com 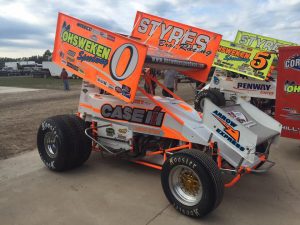